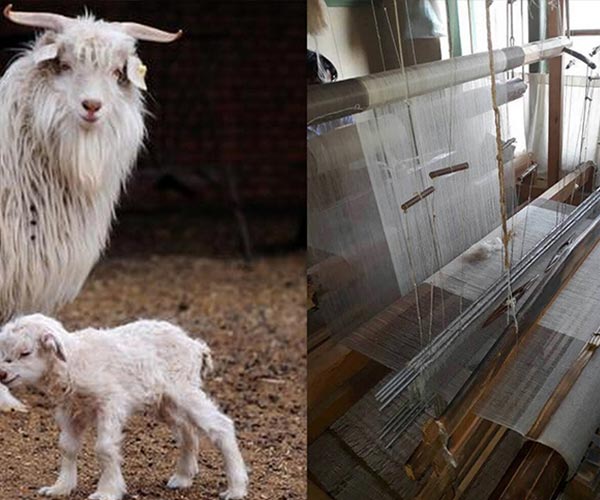 Baragaon Weaves has been working with Pashmina weavers in the Kashmir valley since last April. We have, thus, been asked by many of our friends to give them a brief introduction to Pashmina and how it is woven.

Pashmina comes from the Persian word

pashmineh, which means made from Pashm or wool in Persian. Some historians believe that the 15th century ruler of Kashmir, Zayn-ul-Abidin, was the founder of Pashmina weaving. He is said to have bought Pashmina weavers from Central Asia and settled them in Kashmir. However, some others claim that Pashmina was introduced in the 14th century by Mir Sayyid Ali Hamadani. When Mir Ali Hamadani came to Ladakh, he found that the Ladakhi goats produced soft wool (Pashmina). He took some wool and made socks and is said to have gifted them to the then ruler of Kashmir, Sultan Kutabdin.

The Goat & its Wool

The wool comes from a distinct breed of goats which are found at an altitude of above 14000 feet in the plateau of Changthan in Ladkah. The goats get their name from the region and are locally known as Changthangi and the wool produced by these goats is called Pashmina.

It is also referred to as Cashmere by Europeans. Pashmina fibres are fine and thin, 12-15 microns, ideal for making light weight apparel like fine scarves and shawls.

The goats produce Pashmina wool in their undercoats and during summer they rub themselves against rocks and scrubs and leave behind fine short haired fleece. Typically, a goat produces 250- 300 grams of Pashmina per season, comprising 60 per cent fibre and 40 per cent hair. This wool is collected every spring and cleaned before the goat grows a new coat each winter.

Once the wool is collected, the next step is combing it. That is done to separate hard and soft fibres and to remove dirt. It is then soaked in a mixture of rice and water to make it softer.

This is followed by the process of hand spinning the yarn on the spinning wheel called the charkha to make fine threads. The thread is then taken to the the rangrur (dyer). After dyeing, the hanks of wool morph into bobbins and they are made ready for warping.

Pashmina yarn is very fragile and that is why pure Pashmina can only be woven with delicate hands on handloom. Weaving here is done with a shuttle, carrying the soft Pashmina yarn through the fine yet strong warp.

The weaving process is an art that is passed down over generations. It takes about a week to weave a single Pashmina shawl.